Some time ago I saw on Hack a Day this post about Le Dominoux, an electronic based version of dominoes. At first it didn’t seem much fun, but watching the video I quickly changed my opinion.

In the end, the author also measures the power consumption of the device when the led is not lit, showing it’s around 100uA, and it’s from there that I thought this little device might be improved a bit.

Now, since this device was designed for a 555 contest, the author had to use a 555 IC, and given this constraint I think he has done a good job in optimizing it for low power, using a CMOS variant of the 555 and high brightness leds.

But set aside that constraint, it would be easy to optimize it event further. First of all let’s check the battery lifetime of the original device. Since the power cosumption when the led is lit (probably 5 to 10mA) differs greatly from the standby value of 100uA, battery lifetime largely depends on how much you play with it, but an upper bound is easy to calculate, and it’s 200mAh (CR2032 battery capacity) / 100uA = 2000h / 24 = 83 days. This isn’t very good since even if you almost never play with it, after ~80 days the battery is dead.

One possibility to improve it is to use standard 40xx CMOS logic gates to design the one shot timer, like this:

The fun of CMOS gates is that other than being very versatile, they draw next to zero current when they’re not switching. I built this circuit to measure the power consumption, ant that’s the result: 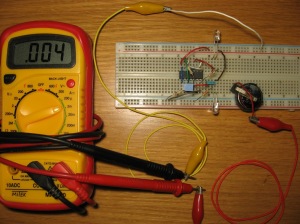 Last notes about this circuit: